The unused battle backgrounds in Mother 3 is a source of major speculation within the Mother community. It may have been intended to be used in a darker version of the final battle, and is speculated by some to be a representation of how Lucas sees Claus throughout the battle when he was still Masked Man; some believed that it could've been the original background for the second Masked Man fight instead of the background that were seen from Ness's Nightmare from Earthbound or a possible third battle. 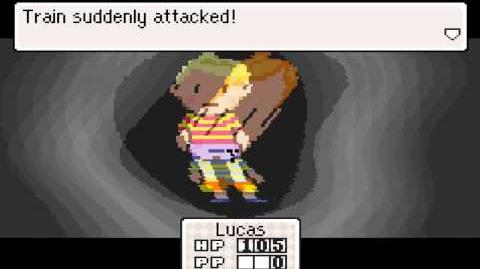 In order to battle the unused battle backgrounds, in the cheat code menu of emulators such as VisualBoyAdvance, 020047EC must be entered in the address bar and one of its enemy modifier codes must be entered in the value bar. The codes must be put in with 8-bit size and the number format on "Hexadecimal". These codes vary between its numerous forms. They are CB (its standard form, called Dung Beetle), CC (its yellow angel form, called Tent Person), CD (naked Claus, called Snow Bunny), CE (Claus clothed, called Clayman), F1 (Same as Clayman, but with a different background transition, called Sign), CF (an undulating red X, called Vapor), D1 (close-up of adolescent Claus, called Rope Snake), D2 (Kid Claus made of pixels, called Aeolia's Table), D3 (close-up of adolescent Claus outlined in red, called Straw), D4 (a face almost like the Facepunch Studios logo without any facial parts but eyes, nose and mouth, called Vapor 2), D5 (Same as Vapor 2 but without a nose, called Mini Elevator), F0 (Lucas and Claus, called Train) and F2 (naked and albino Claus, also called Sign).

While this code is active, the player must encounter an enemy. Instead of beginning a battle with the expected enemy, the battle with the unused battle backgrounds will appear with a small black square dot in the middle that's supossed to be the enemy itself.

The unused battle backgrounds shows itself as a deformed, robotic version of Lucas' twin brother Claus. Aside from its standard form, there's also a yellow angel, Claus naked (and again later with the albino of its normal form), Claus clothed, both Lucas and Claus, a large screaming Claus with no pupils or irises (and again later as a red outline), and a horrifying, distorting red face bearing resemblance to Giygas, possessing white eyes, a nose (and again without a nose), and a gaping mouth.

The unused enemy abilities vary between battle background. Of note is a PSI ability that was likely scrapped during the development of Mother 3, which is simply called "PK ?" (blank line). Its nature is similar to PSI Flash, as it targets all of the boss' opponents and causes adverse effects including poison and nausea. There are certain forms of the boss which have no abilities (such as Straw) and are thus unable to inflict damage on the party members. Various other forms of the battle background possess different levels of this unused PK attack; Snow Bunny, for instance, uses only PK Ω (Hypnosis Ω), which puts all party members to sleep. Dung Beetle uses PK β, which poisons all party members. Tent Person uses PK γ, which causes paralysis to all party members.

Many of the unused enemies earlier (as listed above) forms share the same stat sets, while later forms have much weaker stats.

Slightly more detailed information on the stats can be found on the List of unused and glitch enemies in Mother 3 page.

Add a photo to this gallery

Retrieved from "https://earthbound.fandom.com/wiki/Unused_Boss_(Mother_3)?oldid=63029"
Community content is available under CC-BY-SA unless otherwise noted.