"Zombies and ghosts are on the loose here. Welcome to Threed."
— A Threed resident

The first mentioning of Threed is when Ness arrives in Twoson. Some NPCs, especially around the Bus Station, will talk about ghosts inhabiting the Two-Three Tunnel which seperates the two towns. Ness can attempt to cross the tunnel by foot or by bus, but the ghosts will stop him and make it impossible to emerge from the other side. After Ness rescues Paula and they pay the Runaway Five's debt, the band gives them a ride to Threed in their tour bus as compensation. Since the band plays loud and cheerful music when travelling through the tunnel, the ghosts are unable to stop them from passing through. 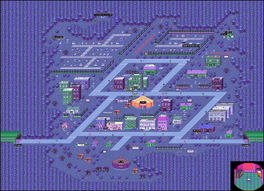 When they arrive in Threed, the town is dark as it is overrun by Zombies and other monsters working for someone named Master Belch. Most of the town's people are either living in the immediate center of town or hiding in their houses, as the graveyard near the outskirts of town is where all the monsters are coming from. Ness and Paula first head to the back of the graveyard, but are blocked by two Zombies guarding a strange passageway. Upon their return to the center of town, the two are lured by a Mysterious Woman into a hotel room, where they are ambushed by zombies.

Ness and Paula awake in a room under the graveyard, and discover that the exit is locked. Paula uses her telepathy to call Jeff Andonuts, a friend she has never met before. Some time later, the Sky Runner circles around the skies of Threed and crashes in the graveyard, straight into the room where Ness and Paula are being held. The friend, Jeff, emerges from the craft, introduces himself, and joins the party. He uses his Bad Key Machine to unlock the door, and the three climb the stairs and exit the graveyard.

After wandering around town, they encounter Boogey Tent, a monster in the shape of a large circus tent. When he is defeated, the tent disappears and Zombies attempt to evacuate the materials inside, but they leave behind a trash can containing a Jar of Fly Honey.

After Ness gets a call from Apple Kid talking about a new invention, the Mach Pizza deliveryman gives Ness and co. the invention, Zombie Paper. This invention is then used to attract and trap all the zombies in the Zombie Relief Corps's headquarters, a former circus tent at the center of town to end the threat against the town during the night. This means that the only way out of the town is the passage north of the graveyard leading towards Grapefruit Falls and Saturn Valley, which involves the defeat of Mini Barf at the end.

Threed's monster problem ends and the town becomes bright when Master Belch is defeated in Belch's Factory. This also means that the tunnel to Dusty Dunes Desert is finally open.

Later in the game, Ness, Paula, and Jeff return once more to retrieve the damaged Sky Runner from the underground cellar. The citizens of Threed, with a little help from Jeff, repair the machine so the party can go to Winters in it.