The Pig Mask Army (spelled Pigmask Army in the fan-translation) is an army in Mother 3. It is an organization founded by Porky Minch, the Pig King, which makes attempts at world domination through the use of Happy Boxes. The army's activity is seen several times throughout the beginning of the game, but it is not until the fourth chapter that their initial goal to take over the Nowhere Islands is revealed, where it has become a success. However, this endeavor does not prove to be enough for Porky, who tasks the Pig Mask Army with extracting the seven Needles in order to awaken the Dark Dragon, a creature which resides underneath the Nowhere Islands. It is revealed later in the game that the Pigmasks were brainwashed to be sadistic, uncaring for other life (in the form of making Chimeras, attacking children, and burning down things) and to like Pokey Minch and agree with his methods.

The Pig Mask Army is responsible for introducing new technology and infrastructure to the islands, and for resurrecting Claus, the brother of Lucas, in the form of the Masked Man, as well as for other sinister activities. Its bases are positioned throughout the Nowhere Islands, most notably the Chimera Laboratory, Thunder Tower, and in New Pork City. Its members are also known to take breaks at the Club Titiboo venue.

Other notable members of the Pig Mask Army include its commander, the Masked Man, the Pork Trooper, a high-ranking member of the army, and Fassad, who helped convince the people of the Nowhere Islands to receive the Happy Boxes. It is also revealed during the game's eighth chapter that Fassad revealed to Porky the existence of the Seven Needles, as he was formerly a Magypsy guardian of the Needles named Locria.

The various titles among the Army's soldiers include simple Pigmasks; captains; colonels; majors; Navy SQUEALs (a parody of "Navy SEAL"); their commander, the Masked Man; and their leader, Porky Minch. Oddly, the weakest Pigmask has the biggest gun, the captain has a smaller gun, the major has a gun with a smaller tip, and the colonel doesn't seem to have a gun because the higher the Pigmask rank is the more the Pigmask cares about muscles instead of guns. This likely explains why the Colonel and/or the Major try to strike a character's joints.

Pigmask soldiers appear to be ordinary people when unmasked, as evidenced by the Pigmask who removes his helmet in Lydia's house. This is because Pigmasks were supposedly ordinary villagers from another time period, sent forward in time and brainwashed. There is also an unused sprite of a Pigmask with female attributes, possibly meaning that female Pigmasks were planned at one time.

Porky Minch, the king of the Pigmask Army.

An assortment of ranks of the Pigmask Army along with vehicles march through the desert.

Another march of EB64 Pigmasks, now with less variety of ranks.

The Clayman Factory in EarthBound 64.

An image displaying a variety of ranks and environmental variations as they would appear in EarthBound 64.

A large march throughout the desert.

Pigmask Sergeants carry Salsa and Samba, locked within a cage.

A Pork Tank and other, unknown, Pigmask machine.

The face of a Pigmask Sergeant, a rank that would become the standard Pigmask in the final game.

The face of a Pigmask Private, a rank that goes unused in the final game.

An unknown rank of Pigmask in EarthBound 64. 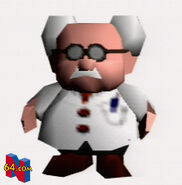 Dr. Andonuts as he would appear in EarthBound 64. 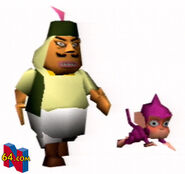 Fassad and Salsa in EarthBound 64.
Community content is available under CC-BY-SA unless otherwise noted.
Advertisement