Lucas (pronunciation: LYOO-kuh; Japanese: リュカ) is the main protagonist of Mother 3. He is a resident from Tazmily Village. He is out of the seven main characters in total (Lucas, Kumatora, Duster, Boney, Claus, Flint, and Salsa).

Sticks are his primary weapon. He can also equip baseball bats, yo-yos, or a flail mace. His signature PK Love power grants him the ability to pull the Seven Needles to awaken the Dark Dragon sleeping underneath the Nowhere Islands.

Lucas is the younger one of the twins; As well as the youngest child of Hinawa and Flint. His older twin brother is Claus. He is also the grandson of Alec.

Lucas has blonde hair and black eyes, occasionally shown with a hint of teal. He usually wears a yellow t-shirt with red stripes, blue shorts, white socks, and orange and yellow sneakers. This outfit is temporarily modified when he is confused with the Masked Man (whom he bears a strong resemblance to). He awakens his PSI powers through Ionia, one of the seven Magypsies, by being forced to hold his head underwater for an extended period of time.

Initially, Lucas is described as being a gentle boy, and can be seen as an antithesis to his more energetic twin, Claus.

He is said to be a bit coddled and seems to be slightly nervous. Despite this, he doesn't shy away from a bit of fun and play with his family. He is said to have been raised honest, hurriedly telling Alec the truth about Claus' disappearance when prompted. Additionally, he seems to be a bit of a late riser.

Following the sudden death of Hinawa and disappearance of Claus in Chapter 1, Lucas gains a reputation of being a 'crybaby'. He is visibly distraught, and struggles to cope with the losses that he's so abruptly had to endure. Duster states that "[Lucas'] poor little heart seems like it's about to break in two." He becomes a bit of a shut-in, rarely seeming to leave his house following the events at Hinawa's funeral.

During this time of grief, Lucas seems to struggle with feelings of survivor's guilt. (This is further supported by his hallucinations within Tanetane Island.) In Chapter 2, he's seen unable to get to sleep despite his efforts, and thinking that he should have gone with Claus. All of this, accompanied with the steady transformation of his hometown, forces Lucas to mature rather quickly for someone his age.

Three years later, Lucas is strong, determined, and resourceful. He cares deeply for his friends and his fellow townsfolk. He is somewhat rebellious with his refusal to buy a Happy Box and give in to Tazmily's modernization. Because of this, though, his local reputation seems to be less than favorable, and he is treated rather crudely - but Lucas doesn't let this get the better of him. After meeting with Kumatora in Chapter 4, Lucas expresses that he wishes to grow stronger. Following this and teaming up with Kumatora and Duster, he bravely pursues any task that he is given, no matter how frightening or daunting it may be.

Throughout the remaining chapters, Lucas is described as becoming "more and more gallant." Nippolyte claims that Lucas has "grown so strong that Flint doesn't need to worry anymore", and has "grown up to be a truly good lad."

Additionally, the coffee sequence in Saturn Valley states that he has grown strong for those he otherwise would be unable to help. Although glimpses of his previous shy self still shine through, Lucas has toughed through the odds and has become a kind, resilient boy, and this remains true up to the final moments of the game.

Lucas is playable in the Prologue as a tutorial character. In the tutorial, Lucas learns how to dash, and is taught how to fight in a battle against the Mole Cricket.

In Chapter 1, Claus, Lucas, and Hinawa fail to return to Tazmily Village from Alec's house. This causes the village to organize a search party to look for them. After Flint and Duster's fight against the Reconstructed Caribou, Claus and Lucas are found. However, Lucas is quiet, and only murmurs something about the "forest coming to life, and taking them". After Flint learns of Hinawa's death, he loses his grip and Claus and Lucas have their eyes covered by Tessie to not let them see what's happening. He attends Hinawa's funeral, where Lucas reveals that Claus went to fight the Drago that killed their mom in order to avenge her. He stays at Flint's house until the third chapter.

At the end of Chapter 3, Lucas comes to assist Salsa, Kumatora, and Wess when they are cornered by Fassad. He brings Drago Jr. and his mother, apparently wanting to avenge their cyberized family member.

At the start of Chapter 4, he becomes the permanent main character.

Lucas is the main Assist PSI user of the party because he learns all versions of Lifeup, while Kumatora only goes up to Beta. He also learns all versions of Healing, while Kumatora only learns Alpha. He also has Refresh, which restores about 10% of the target's maximum HP each turn. His unique PSI attack is PK Love, which does anywhere from 100 to 800 damage, depending on what level of power is used. He also learns Shield, Counter, PSI Shield, PSI Counter, Offense Up, and Defense Up. In Chapter 5, he learnsPK Flash. In Super Smash Bros. Brawl, however, he can use PK Fire, PK Freeze, PK Thunder, PSI Magnet, and PK Starstorm. 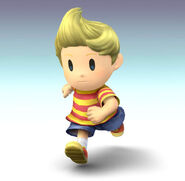 Lucas in Super Mario Maker when the Lucas Amiibo is activated.

Lucas' redesign for EarthBound 64. The stripes of his shirt are visible. 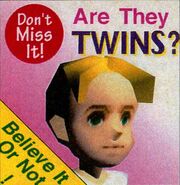 A close up of Lucas' younger face.

Lucas hops into a Pork Bean.

Lucas walks along a pipe over the Clayman Factory.

A rather clear look at Lucas' early model.

Lucas with Duster and Salsa explore the Sunshine Forest. These are their early designs.

Lucas, Duster, and Salsa continue deeper into the forest.

A close of up Lucas, Duster, and Salsa as they stand in front of a pipeline running through the Sunshine Forest.

Lucas with other kids, standing in front of Thomas' General Store.

Lucas in the crossroads of Tazmily with many other villagers and carts.

Lucas in the Shimedori Forest.

A young Lucas and Claus look up at their mother, Hinawa.

Lucas in the back of the minecart, looking to his side.

A shot of Lucas' back while riding in the minecart.

Lucas and Claus sit near the campfire.

Lucas and Kumtora with their designs post-timeskip in EarthBound 64. His shorts have changed color.

An older Lucas latches onto his father as a Pigmask ship takes off.

Lucas being surrounded by enemies.

Lucas standing near a hot spring inside of the Unlost Cave.

Lucas and Flint in the Sunshine Forest, finding a pipeline.

Lucas and Flint in the Sunshine Forest, encountering Rhinobirds. Lucas appears to be either jumping or being knocked back. 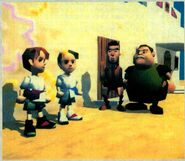 Lucas and Claus standing with Butch and another villager in Tazmily Village.

Lucas and Claus sit at a table.

Lucas seen standing to the right of the Bell of Repose. 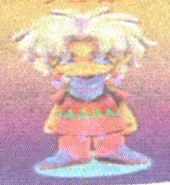