"You don't have to explain a thing... I'm Jeff. I came because you called me. I'm not very strong, really near-sighted, kind of shy, and I tend to be a little reckless. This is just the way I am... I hope you want me to be your friend... okay?"
— Jeff

Jeff Andonuts (ジェフ Jefu) is one of the playable characters in EarthBound, the second to join Ness. Jeff is the only permanent party member who is unable to use PSI abilities. To compensate for that, he can repair broken objects to turn into useful machines and weapons for battle, although what exactly he can repair is based on his IQ level and the broken items he has in his inventory. He usually uses Guns as his primary weapons, along with bottle rockets and the aforementioned repaired gadgets such as the Hungry HP-Sucker, Heavy Bazooka, Neutralizer, and Shield Killer. He also has the Spy ability, allowing him to look up enemy attributes and snatch away their drop item if they have one. He educates at Snow Wood Boarding School, before being called by Paula via Dreams to go to Threed and save both Ness & Paula.

Jeff is the genius son of the great scientist Dr. Andonuts, and attends the Snow Wood Boarding School in Winters, FoggyLand. Paula communicates with him telepathically to rescue them from captivity in Threed. After acquiring the Sky Runner from his father, Jeff travels to Threed and rescues Ness and Paula, securing his place as one of the chosen four.

Jeff appears as a trophy in Super Smash Bros. Melee, with the text,

Another of Ness's close friends in EarthBound, Jeff is the only son of the famous scientist, Dr. Andonuts. Jeff is a mechanical genius, able to turn common, broken tools into complex weapons like the Hungry HP-sucker and the Slime Generator. He's a bit on the shy side but incredibly intelligent and brave in the heat of battle.

Jeff appears in Super Smash Bros. Brawl as a sticker based off his clay model, with the distinct change of his outfit's color and that he is looking up. Attaching this sticker to the bottom of Ness or Lucas's trophies in The Subspace Emissary increases their PK attack by 24. He also appears as an Assist Trophy in Brawl, 4, and Ultimate, launching bottle rockets at his opponents. 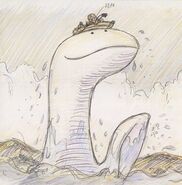 Jeff riding on the head of Tessie in a boat

Jeff with his unused outfit and Bicycle examining a simplified Stonehenge

Jeff with his Bicycle and unused outfit near the original idea for Dr. Andonuts and his laboratory.

A scene similar to the final EarthBound version; Jeff now has his regular outfit

Jeff in Brawl as an assist character.