"Ninten! I am grateful to your family. Your Great-Grandparents, George and Maria raised me. But, George stole vital information from our planet that can be used to betray my people... And now, one of his descendants is obstructing our plans, and must be stopped!! Ninten! I am talking about you! Go home now! Perish with the rest of the ugly Earth People. Foolish one, you cannot do a thing with your meager powers... Powers worthy of a lowly insect. Ninten! You alone, I may save you. Just you alone. Board our Mother Ship with me... then, fall into a long sleep with your friends and the other ugly earth people."
— Giegue, EarthBound Beginnings)

Known as both the "Embodiment of Evil" and the "Universal Cosmic Destroyer", Giygas is an evil alien who, upon failing his original mission to reclaim the knowledge of PSI from humans, intends to sentence all of reality to the horror of infinite darkness. With an army of Starmen, Octobots and other deadly war machines, Giygas also uses his immense power to influence certain Earthlings to assist him, such as Pokey Minch and Geldegarde Monotoli. His influence also causes animals and people to become violent and distressed. He belongs to a race of aliens who originally had the power of PSI and, for unknown reasons, abducted humans in the 1900s and 198X.

In EarthBound, most of Giygas's operations take place in the city of Fourside.

Giygas, known as Giegue in EarthBound Beginnings, was an alien raised from infancy by a woman named Maria and her husband George, both of whom were abducted from Earth in the early 1900s. During this time, George studied the alien's PSI powers without their permission, culminating with his sudden return to Earth. The couple raised the infant Giygas as their own son, and he became especially close to Maria. However, due to George's betrayal, when he matured Giygas was tasked by his people to ensure that PSI could not be used against them by humans. Giygas did not want to betray those who raised him, particularly Maria, but was forced to attack Earth regardless to claim this knowledge back. In the end, he was forced to detach himself from Maria and begin preparations for the invasion of Earth.

Eighty years later, the invasion begins, and Giygas is confronted by the great-grandson of Maria and George, Ninten, and his companions. Giygas's influence is seen across the land as inanimate objects come to life, animals turn vicious and strange aliens begin to inhabit the earth. During the final confrontation, Giygas, still hurt by the loss of Maria, offers Ninten to come with him back to his home planet. Ninten declines this offer, and Giygas continues to attack. Ninten and his friends quickly prove no match for Giygas; they resort to singing a lullaby once shared between Maria and Giygas, and the comforting memories he had suppressed weaken Giygas. His guilt and love for Maria distress him and he is forced to surrender and retreat, but not before promising Ninten that he will return.

"So, isn't this terrifying? I'm terrified too. Giygas cannot think rationally anymore, and he isn't even aware of what he is doing now. His own mind was destroyed by his incredible power. What an all-mighty idiot! Yep, that's what he is! Heh heh heh heh... and you... you will be... just another meal to him!"
— Pokey Minch

Giygas returns to Earth many years later in 199X as the primary antagonist of EarthBound, though he vastly differs from his appearance in EarthBound Beginnings. Ten years in the future, Giygas has taken over the Earth and sent all in it to darkness. He discovers the Apple of Enlightenment which prophecizes his defeat at the hands of Ness and so travels back into the past in order to stop Ness. In the present day, his influence is spreading over Eagleland, in particular to Ness's neighbor Pokey Minch. Pokey becomes one of Giygas's main agents in the attack against Ness, aided by his jealousy of Ness. Giygas, already unstable from his guilt surrounding the loss of Maria, exerts such tremendous evil power that it destroys his entire being, including his mind, causing him to become undefinable by human standards. As such, Giygas manifests as what can only be described as pure evil; in Pokey Minch's words, "he is the Evil Power". Due to the loss of his mind, Giygas becomes irrational and incapable of thought. To rectify this, Pokey seals him in the Devil's Machine so that his power would be contained and his mind kept intact. In the final battle, Pokey attests that Giygas isn't aware of himself or what he is doing, referring to him as "an all-mighty idiot".

Now wielding a vast cosmic power which he is unable to control, Giygas becomes a threat to the existence of the universe itself. To stop him, one of the only known beings who manage to escape destruction in the future, an alien insect named Buzz Buzz, travels back to 199X. Buzz Buzz warns Ness of the impending catastrophe. Ness is given the Sound Stone and instructed to record the Eight Melodies in order to gain the power of Earth and be strong enough to face Giygas. Giygas's influence is further seen throughout the world, mainly in the form of enemies that Ness encounters. Now existing as the whole of evil power in the universe, Giygas is able to manipulate the evil in the minds of living beings, both human and animal, and can apparently manipulate even the forms of inanimate objects.

Ness and his friends, known in prophecy as the Chosen Four, are forced to abandon their bodies and travel into the past in order to attack Giygas in The Cave of the Past. In the final battle, Giygas is held within the Devil's Machine, which was created to contain Giygas's tremendous power. During the battle, Pokey shuts the machine off, causing all of Giygas's power to be unleashed; the event surrounds the four children in a chaotic, bizarre dimension of darkness. His attacks are random and incomprehensible, and his speech is erratic and mindless. Although Giygas was too powerful for Ness and his friends to overcome by fighting, he is eventually defeated after Paula calls out to the people of Earth to Pray (including the player), and the combined prayers reach Giygas and exploit his weakness, the same human emotion that weakened him in EarthBound Beginnings. He breaks up and is reduced to nothingness, and his apocalyptic future is erased.

The five phases of the battle are: 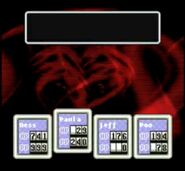 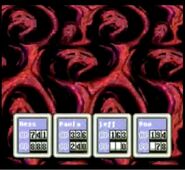 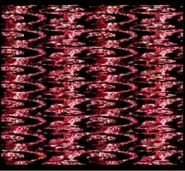 In an interview about Giygas's appearance in EarthBound, Shigesato Itoi revealed that while Giygas is mostly something that can not be made sense of, a part of it is "like a living being that deserves love. That part is the breast of Hisako Tsukuba from “The Military Policeman and the Dismembered Beauty”. "The Military Policeman and the Dismembered Beauty" (憲兵とバラバラ死美人 "Kenpei to Barabara Shibijin") is a 1957 adult film that Shigesato Itoi accidentally saw as a child when he walked into the wrong theater, confusing a lovemaking scene that becomes a murder as rape. In fact, Itoi is incorrect about several details from the scene: he says that "When the guy grabbed her breast really hard, it got distorted into this ball shape. It all hit me really hard. It was a direct attack to my brain." despite the fact that this does not actually occur, and Itoi admitted that his memories of that scene were "fuzzy at best". However, from his memories of the scene, he added "this sense of terror having atrocity and eroticism side-by-side, and that’s what Giygas's lines at the end are. During the end, he says, “It hurts,” right? That's... her breast. It’s like, how do I put it, a “living-being” sensation."

Giygas's dialogue was created by both himself and a staff member Matchan Miura. Since Itoi did not know how to use computers at this time, the two of them would sit alone in a room with Itoi speaking the dialogue one Japanese letter at a time and Matchan typing in on the computer and it being displayed in hiragana. Itoi would then look at the screen and give Miura instructions on what to change, and a section would be finished once Itoi was impressed and they both were almost in tears.

For many years, fans have debated and created multiple theories concerning Giygas. Two theories have achieved widespread acknowledgment and have been of popular debate. The following are three theories.