Duster (ダスター Dasutā) is a character in Mother 3. A thief who sets out on adventures of his own first introduced in Chapter 1, he later becomes a main character in Chapter 2. Duster joins Lucas at the end of Chapter 4 after being in the DCMC for three years as their bassist (where he was called Lucky); it is also shown that he learned to play the double bass cello after being picked up by DCMC after the event in Chapter 3 when Duster "goes missing" from Kumatora and Wess for three years. He is separated at the end of Chapter 5, and returns permanently during Chapter 7, though in the final battle he is somewhat useless due to the fact that the Masked Man uses a move that K.O.s the entire team except for Lucas. He usually uses shoes as his primary weapon, along with a number of Thief Tools that weaken or distract foes.

While having a leg that he is always seen to limp with, Duster continues to have excellent speed. Not only is he the second-fastest party member after Boney, but he can sometimes "Attack with blinding speed!" to attack the enemy before the start of the battle or jump behind an enemy, which flips the entire party behind the enemy and gives the party a turn to attack before the enemy can. He can also unleash a reverse kick on an enemy that has attacked the party from behind before the enemy takes their turn. Wess alludes to an incident in his past in which he blames himself for paralyzing Duster's left leg. The limp is recognizable regardless of what he is wearing, such as when he is in the guise of a Pigmask. However, he has no difficulty running, kicking, and moving on staircases, so his leg might not be completely immobile. Due to the way he holds his hip to give his leg extra support, he may just be paralyzed from the ankle down, which would make it awkward for Duster to walk but not reduce the effectiveness of kicking with the leg in mention with a good shoe on.

Duster appears in Super Smash Bros. Brawl as a sticker. Attaching this sticker to the bottom of Ness or Lucas's trophies in The Subspace Emissary increases the power of their leg-based attacks by four.

Duster appears as a primary spirit in the new Spirits mode. He is an attack type, novice spirit with one support slot. He ironically has the ability to increase foot attacks. His Spirit Battle represents him as an orange Luigi that prefers kicks on a foggy Battlefield Pac-Land stage representing Osohe Castle.

Duster exploring the Sunshine Forest with Lucas and Salsa. This is their early EarthBound 64 models.

Duster, with Lucas and Salsa, continue venturing the forest.

Duster, Lucas, and Salsa finds a pipeline in the Sunshine Forest. A close view of their models. 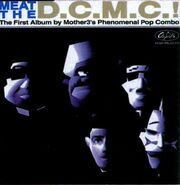 Lucky/Duster's face can be seen in the bottom row.

Duster seen amongst numerous villagers at the campfire.

Duster in the Sunset Cemetery.

Duster latches onto a Pigmask ship along with Flint, Lucas, and Boney.

Lucky playing the bass in the back.

Another image of Lucky. 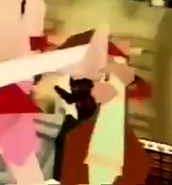 The closest shot of Lucky's model there is.