Mr. Saturn
Pigmask Army (Against his will)

Dr. Andonuts, (アン・ドーナツ博士, Dr. An Doughnut) is a character in EarthBound and Mother 3, being one of the few to appear in both games. He is a famous inventor and the father of Jeff Andonuts, although Dr. Andonuts' wife is never identified.

Prior to the events of EarthBound, he was the first leader of Winters' Snow Wood Boarding School's Ultra Science Club and invented the Instant Revitalizing Machine and Sky Runner before starting to design the Phase Distorter. When Jeff escapes his boarding school and eventually meets his father in his lab, Dr. Andonuts reveals that he had not seen Jeff in roughly ten years and at first thought that Jeff was someone Mr. Brickroad referred to see him. Dr. Andonuts also asks Jeff if he wants a donut.

This meeting between Jeff and his father is the first appearance Dr. Andonuts makes in EarthBound, and ends when Jeff is allowed to take the UFO-shaped Sky Runner sitting in his lab to (and subsequently crash through) the Threed graveyard where Ness and Paula are trapped underground. After this, Dr. Andonuts admits a Cave Boy into his lab that will sell Ness and co. items, and freely tells Ness of Jeff's bedwetting and the fact that Apple Kid is on his way.

He also successfully creates his first chimera, Dungeon Man. This is the world's first combination of a dungeon and a person, namely Brick Road; his skill in creating chimeras is later used in Mother 3. After Ness and friends visit the Tenda Village for the first time, Dr. Andonuts is among the people kidnapped and held at the Stonehenge Base near his laboratory until being freed. Immediately after being released, he states that he wants to start building the Phase Distorter as soon as possible.

After Ness's travels through Magicant, Dr. Andonuts, Apple Kid, and Gerardo Montague can be found in Saturn Valley with what they state is a working Phase Distorter. However, this is actually the second version (the prototype they created was stolen by Pokey Minch), and fails to teleport, causing Dr. Andonuts to speculate about the missing material. He says that the material he is thinking of cannot normally be found on Earth and that it only comes from meteorites, also noting that one fell when he was much younger.

Dr. Andonuts then asks Ness if he has seen a meteorite recently, and regardless of Ness's response (although Dr. Andonuts will make a comment about waiting for a meteorite to fall from the sky if Ness says "No"), Dr. Andonuts will realize that the Phase Distorter needs Zexonyte, which he can synthesize from a piece of the meteorite that fell in northern Onett to operate. He also has a feeling that returning to Onett to retrieve the meteorite piece is now dangerous because Giygas has Onett in his evil hands, and that Ness should take every possible precaution before traveling there. Dr. Andonuts is extremely enthusiastic about how work went with Apple Kid and Mr. Saturn, but states that the Mr. Saturn they worked with was kidnapped with the prototype Phase Distorter.

After Ness and co. bring the required element that Dr. Andonuts claims he has never seen in person before, he and Apple Kid work overnight to make the Phase Distorter work. They also add the ability to repair biological functions and save progress. However, Dr. Andonuts warns Ness and friends that they should be sure they are prepared and ready to leave, as they might not be able to come back.

When Ness and friends appear to be trapped in the Cave of the Past's appearance in the present, the third version of the Phase Distorter appears with Dr. Andonuts, Apple Kid, and another Mr. Saturn who helped them complete the machine quickly. Dr. Andonuts announces that Giygas is attacking from where they are standing, but from the past. He seems afraid to tell the party something, and walks away. When talked to again, he states that the Phase Distorter 3 can warp them to the past. However, life is demolished by warping, so Dr. Andonuts proposes transferring Ness's party's spirits into robots which could then go to the past. This would leave their bodies in the present time and their minds in the past, but he cannot promise that their spirits will ever come back to the present. When Ness and friends repeatedly accept this risk, Dr. Andonuts takes Ness's red cap to put on his robot, and the four wake up in the Phase Distorter 3 as robots before warping through time to the Cave of the Past.

When the Phase Distorter 3 arrives back at Saturn Valley, Dr. Andonuts, Apple Kid, and George Montague stay with the Mr. Saturns as they react to Paula's praying from the past. When Ness and friends get back, Jeff states that he will be staying in Saturn Valley for a while with Dr. Andonuts to try and learn more.

Before the events of Mother 3, Dr. Andonuts is kidnapped by Porky Minch and taken to the Nowhere Islands to design Chimeras. This is heavily implied in Chapter 7's Chimera Laboratory, the first time he is seen in-game, when he tells Lucas and Boney his name and that a certain man is forcing him to conduct various types of research. He is hiding in a garbage can because Salsa and Samba, in their attempt to hide from the Pigmasks, released all the chimeras (including the Ultimate Chimera). After being talked to for the first time, however, he insists that there is no problem here and asks Lucas to leave it at that.

When the Ultimate Chimera starts to come after Lucas and Boney in a cutscene, however, Dr. Andonuts musters up his courage and runs to them in his garbage can to tell them that it is a battery-operated chimera and that it has a button on its back that can turn it off. However, he also recommends using Boney as bait, much to Boney's chagrin. When the Ultimate Chimera appears to be dead, Dr. Andonuts comes out of his garbage can to thank Lucas and Salsa, and state that he is going to take this opportunity to leave the military and devoting his life to making all things happy. However, Boney is still upset and chases him away while he yells that Boney misinterpreted what he said.

He is also helpful in the pulling of Doria's needle; since the water from the eastern pond must be transferred to the empty western pond, Dr. Andonuts stands outside the Chimera Laboratory and gives Lucas and co. their choice of chimeras to get the job. The choices are the Dryguy, Bucket Brothers, or the Mr. Pump chimeras. If a chimera fails, they can be taken back to Dr. Andonuts to exchange for another one that might work until the water has been transferred.

The next time Dr. Andonuts can be seen is when the camera is panning the audience at DCMC's last show on the 24th floor of the Empire Porky Building. However, he cannot be spoken to and is only seen from behind. He then appears is in Porky's throne room, where he tells Porky that he refuses to work for him anymore. However, Porky starts laughing and completely ignores his statements.

After the game's penultimate battle with Porky (where he seals himself in the Absolutely Safe Capsule that he says he tricked Dr. Andonuts and the Mr. Saturns into making for him), Dr. Andonuts arrives and confirms Porky's statement about the device's creators. He also states that he feels sorry for Porky, as he can never exit the capsule. He had told Porky in a hushed voice that it should not be used just yet, but now Porky can only live inside the capsule for all eternity. Dr. Andonuts is last seen in-game rolling the Absolutely Safe Capsule along the ground with an oblivious Porky inside.

Dr. Andonuts is also alluded to being the creator of the Claymen by an unnamed Pigmask who was only able to remember part of his name.

It is possible that Dr. Andonuts is actually Lloyd from Mother as an adult, as they both hide in trash cans and have similar hair colors. It is also interesting to note that both Lloyd and Dr. Andonuts's son Jeff wield Bottle rockets in battle. If this is true, then this would make Dr. Andonuts the only character to appear in all three games in the Mother series. However, since Lloyd is eleven years old in 198X, this would imply that Dr. Andonuts is twenty-one in 199X when EarthBound occurs and that he had Jeff when he was eight. 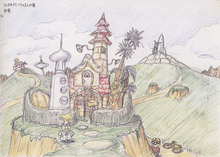 There are two major possibilities for the last name of Dr. Andonuts. The first is that it is simply a reference to him wanting more donuts, combining 'and' & 'donuts'. The second possibility is that it comes from 'an' & 'donuts'[2], where 'an' (also known as anko) is azuki red bean paste. Azuki red bean paste is a sweet paste that is sometimes used in pastry fillings or donuts[3]. Regardless of which is true, both versions imply that he is obsessed with donuts.

Another possibility may be that it comes from the computing terms 'and', 'or', and 'not', which are used by computers to produce outputs from inputs.

Retrieved from "https://earthbound.fandom.com/wiki/Dr._Andonuts?oldid=59498"
Community content is available under CC-BY-SA unless otherwise noted.