amiibo are figurines with an embedded NFC chip created by Nintendo that when scanned with a Wii U, New Nintendo 3DS, or Nintendo Switch, can unlock certain content. Older 3DS models use the NFC Reader/Writer which was released in 2015.

Here is what happens when you use the Ness and Lucas amiibos with a few games.

In Super Smash Bros. for Nintendo 3DS and Wii U, with amiibo, players can create and train their own CPU fighter. Players can customize their amiibos with any special moves they unlocked or by changing their stats by feeding them equipment.

All amiibos that were compatible with Super Smash Bros. for Nintendo 3DS and Wii U will be compatible with Super Smash Bros Ultimate. Fighter data from the previous games can be carried over when used in Super Smash Bros. Ultimate, or be erased and start the FP from scratch. Either choice can grant an award, however the amiibo can no longer be used in the previous games. The ability to change an FP fighter's specials was removed in this game, and the ability to feed equipment was replaced with a similar feature to inherit spirits.

Scanning most amiibo will unlock the mystery mushroom, which allows Mario to transform into the character of whichever amiibo was scanned, including Ness, Lucas and tons more. However, the mystery mushroom can only be used in Super Mario Bros. game styled courses. This feature is currently not in Super Mario Maker for Nintendo 3DS and is replaced by the weird mushroom.

Scanning any amiibo allows the player to play a short demo from a random NES or SNES game. Scanning the same amiibo that unlocked a game while playing it can switch the current scene. Only certain games are playable, sadly not including EarthBound or EarthBound Beginnings.

In Miitopia, scanning most amiibo will unlock costumes for playable Mii characters, otherwise award the player a small gift. The player can scan amiibo when meeting up with the Nintendo Fan. Scanning the Ness amiibo will unlock a Ness hat and outfit. Amiibo outfits unlocked in the game can be worn by Miis of any job (except for Tanks, as they cannot wear that type of outfit or headgear).

Many games that are compatible with amiibos allow you to scan any amiibo. The user will normally only be able to scan an amiibo once per day and get something generic like some form of currency. Some of these games include Hyrule Warriors, Mario Party 10, Captain Toad: Treasure Tracker, and Pokkén Tournament. 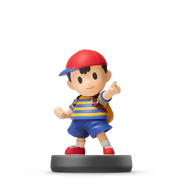 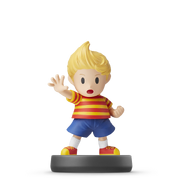 A Ness amiibo in packaging

A Lucas amiibo in packaging.

Ness costume in Miitopia
Add a photo to this gallery

Retrieved from "https://earthbound.fandom.com/wiki/Amiibo?oldid=61029"
Community content is available under CC-BY-SA unless otherwise noted.