What's on your mind?

Is there a Earthbound fanon? If not I can make one

Let's see the EarthBound party in a new light.

Ness is a young'n with an awesome destiny, but how can he become stronger? Kill all the wildlife he can possibly kill, of course. Ness murders crows, snakes, and moles without batting an eye. Ness, throughout his journey, also beats up unassuming people, alcoholics, and religious activists (who are also violent but we gotta draw the line somewhere). Considering this man baby defeats like three species of dog (one of which is made of fire for cryin out loud), Ness is a mass murderer whom we need to keep an eye on.

His girlfriend is also really dangerous. Paula Jones, while kind and nurturing at heart, has powers too strong for human society. PSI Freeze is a really powerful move in which she has used many many times during the journey. And PSI Fire is exactly that. Burn your enemies. While Ness beats on people, Paula is just plain destructive.

I don't need to talk about Jeff. He uses guns. Nope.

Poo is also kinda a potential destructor of worlds. Yes, he knows martial arts, and that alone can scare anyone in harm's way. But he knows how to fight. AND knows some of Paula's powers. Not to mention he can all upon literal stars from the sky to defeat his foes. He also might have a sword. There's no mistaking it; Poo is violent.

Sup yall, its ya boy Time. Ever since @Sea-cuco145 did the whole craiyon image thingy, I've admittedly been enjoying it too much that I wanted to show some of the joyous results I got. Just note that if you do see a pattern going on, I usually chose Ness or Lucas as they got the best results. Alright? Alright. 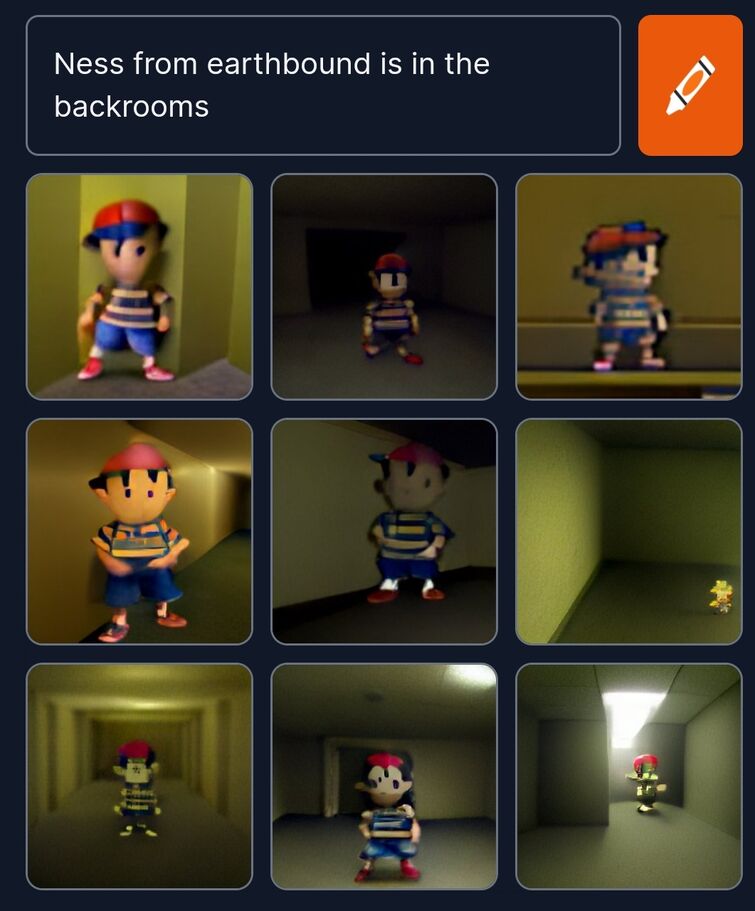 Moving from left to right...

1, Ness steps to the side, letting you go first into the backrooms...

4, Ness pulls up his pants and makes the conscious decision to show you

5, While pulling up his pants, the room grows dark, and Ness's right eye drops 2 inches

7, Ness reveals his dark side and traps you in the hall.....

8, Ness stands in front of you, acting like my doctor who's about to tell me that I need surgery in the next hour 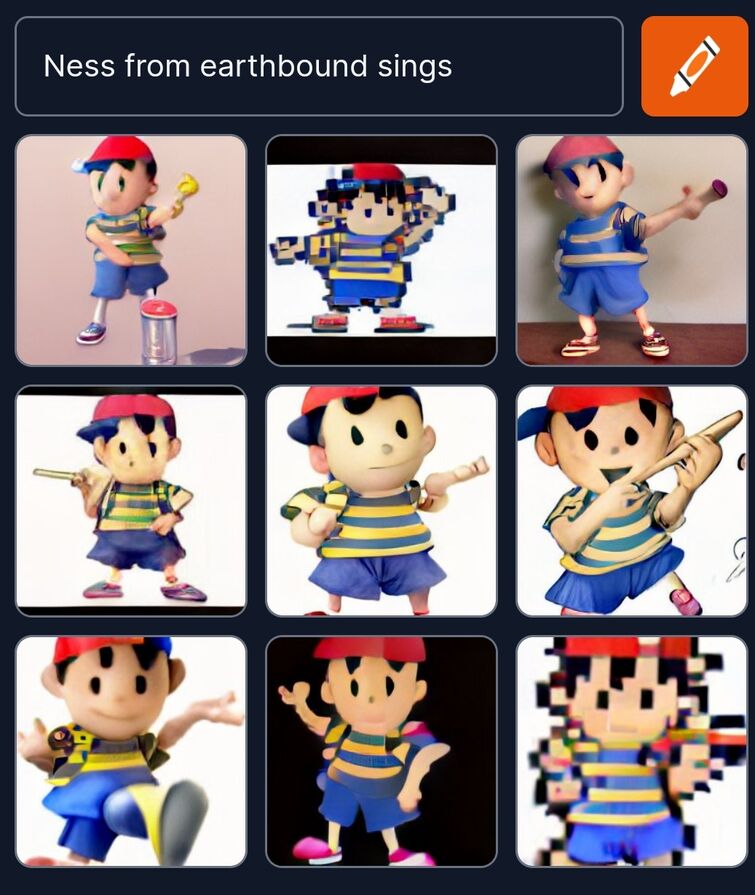 1, Ness plays the golden spoon while standing on a good ol can of Campbell's soup

2, Pixelated Ness does a little jig

3, Ness tries to look cool, but instead scares the girls away cuz of his disembodied finger

8, Ness poses, whilst wearing Paula's shoes... for some reason...

9, Pixelated Ness gets so pixelated I don't even know what he's doing 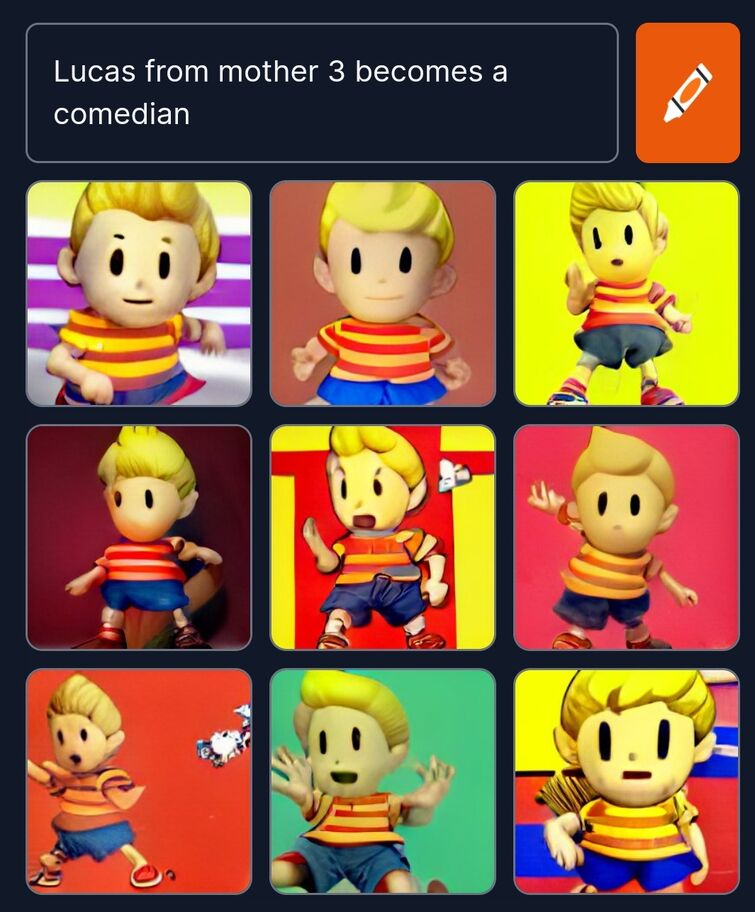 1, Lucas is smiling. That deserves some appreciation

3, Instead of being funny, Lucas becomes more motivational, which I guess that kinda tracks

4, Lucas sits on a log stump in a stand-up comedy style, which I think is cute lol

8, Although he sits down, Lucas acts like Michael Rosen doing a poem

9, Lucas, although normal, those arrows behind him make me think that he's become Robin Hood 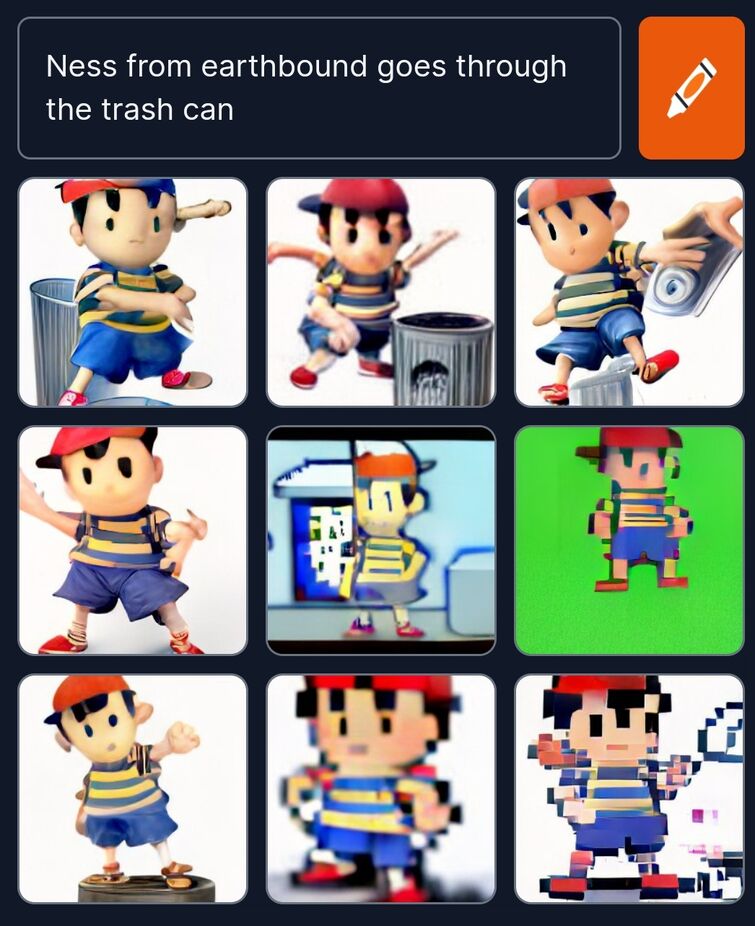 3, That trash can lid looks so much like a boombox, now I can't look at Ness the same ever again now that I called him a rapper

5, Ness waitin cool at the subway

9, Pixelated Ness, once again becomes way too pixelated even for existence 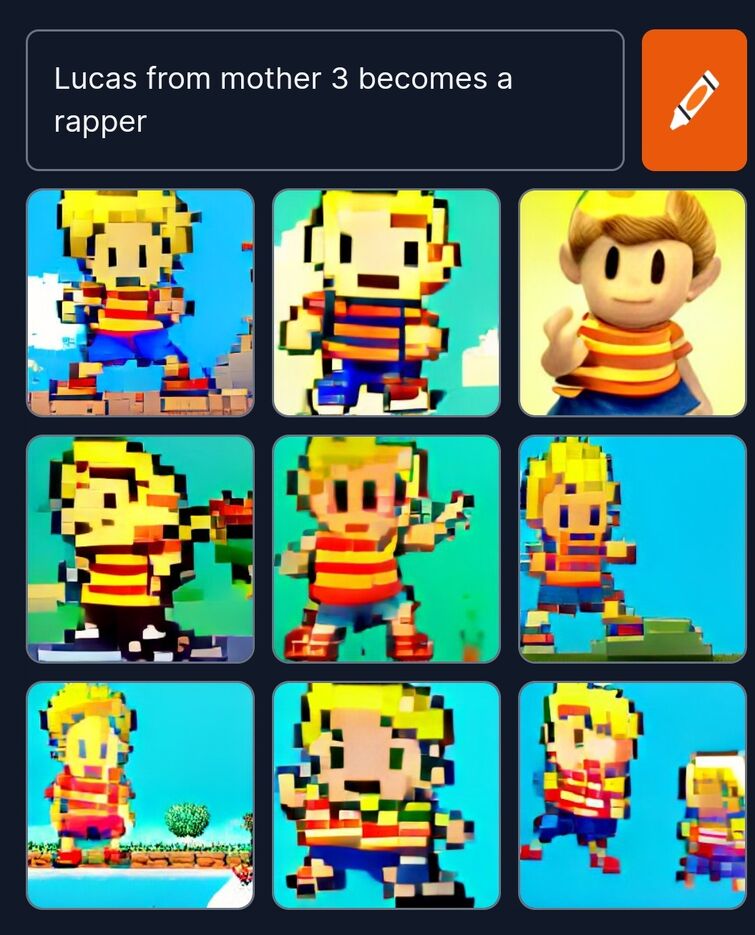 1, Lucas ditches his old hairstyle in favor of an afro

2, When you ask Lucas if he wants some omelettes

3, Lucas becomes an elf and tells you to come on

5, Lucas tells everyone that the sky is falling

6, Lucas does the running man (sort of)

I tried out this site that basically makes ai generated images from prompt words. And here's what happened, in (mostly) no particular order! I wanted to see if the site would actually work when using characters like this, so I just typed in something simple. While this produced some unusual results, It's a little tame compared to some other ones. A pretty good start.

1) Ness becomes a mascot costume for some reason 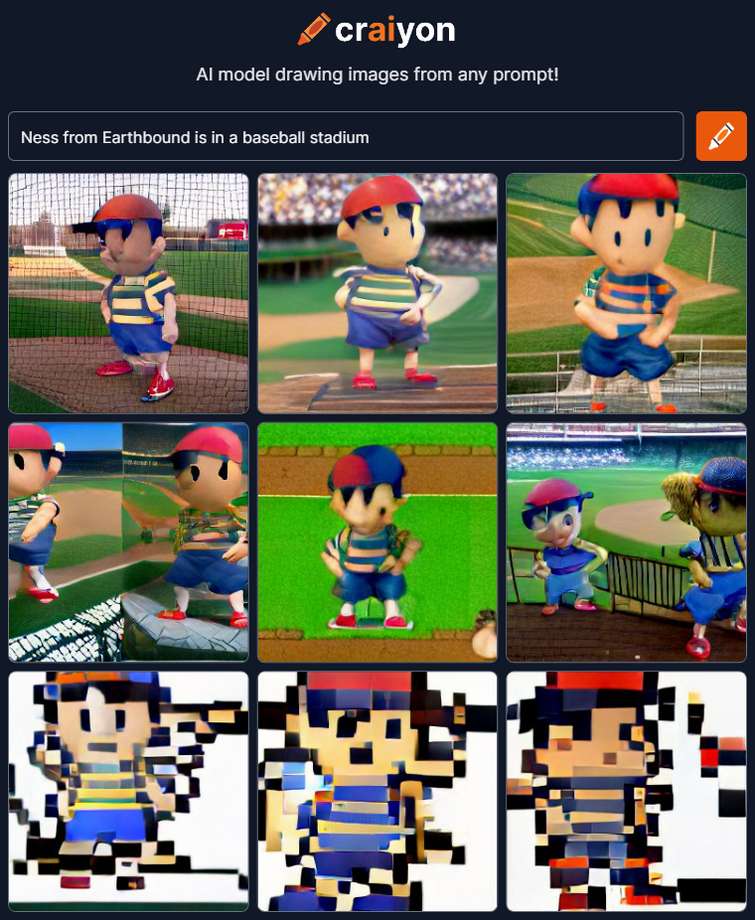 And what the hell is that right-middle one??

2)Lucas goes to the woods 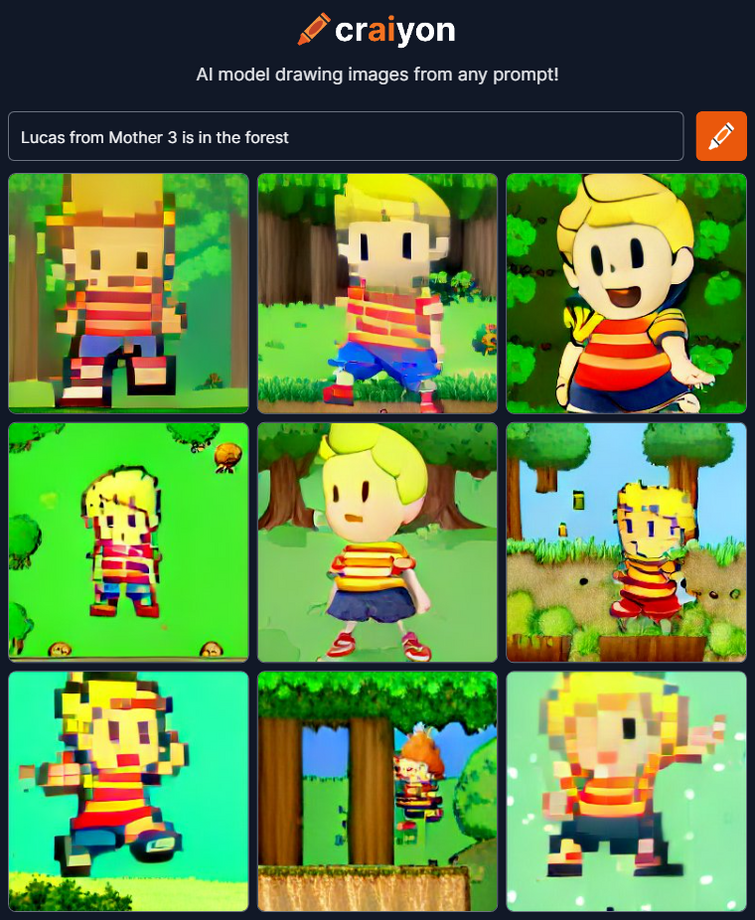 These are actually pretty cute! He looks like he's having a great time ^^ 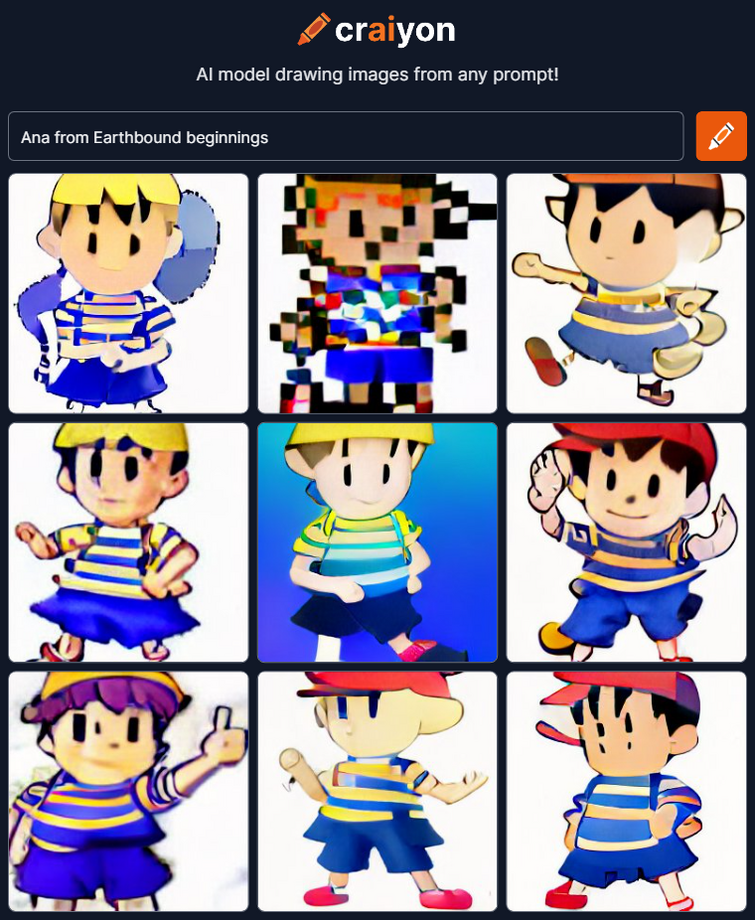 I tried to get the ai to generate a scene with Ana, but I guess it dosen't recognise her, lol 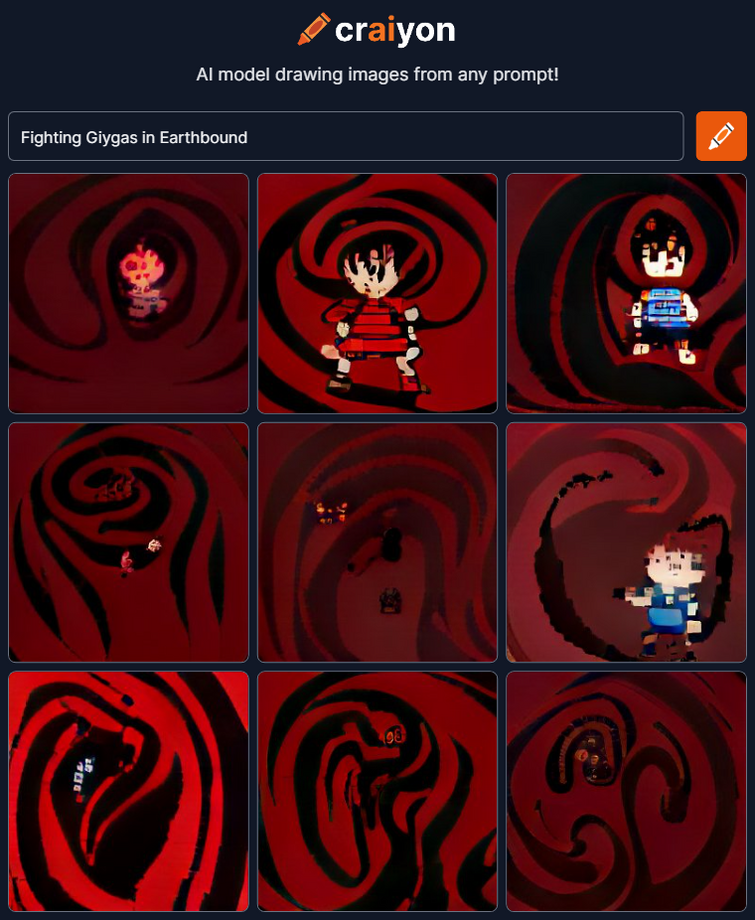 I think it's interesting that the ai seemed to pick up on Ness' reflection(?) on the Devil's Machine from the first phase 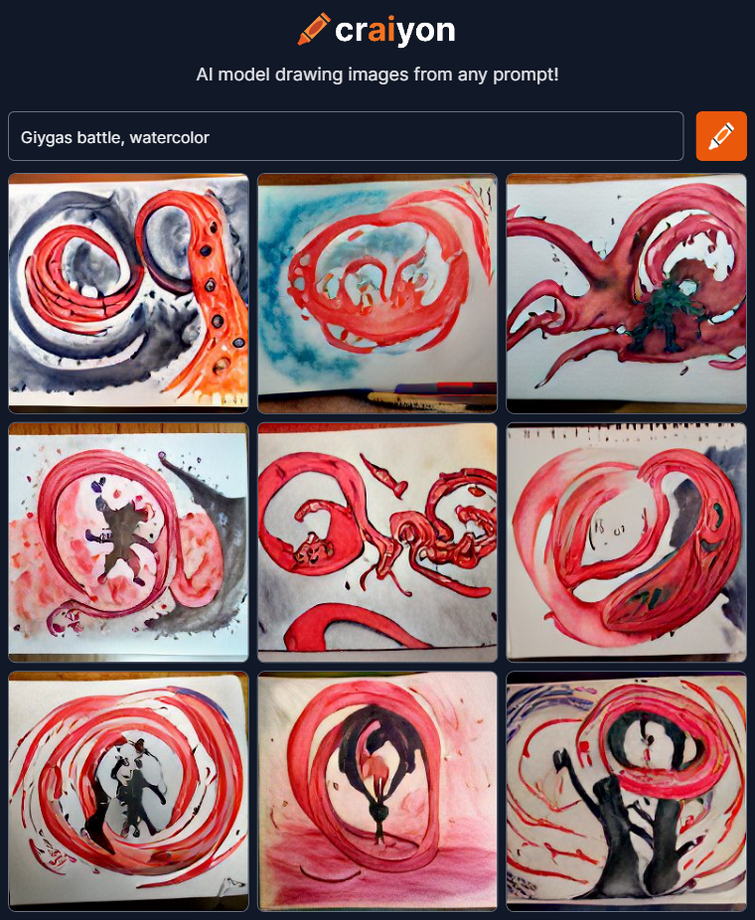 I think these are sick! 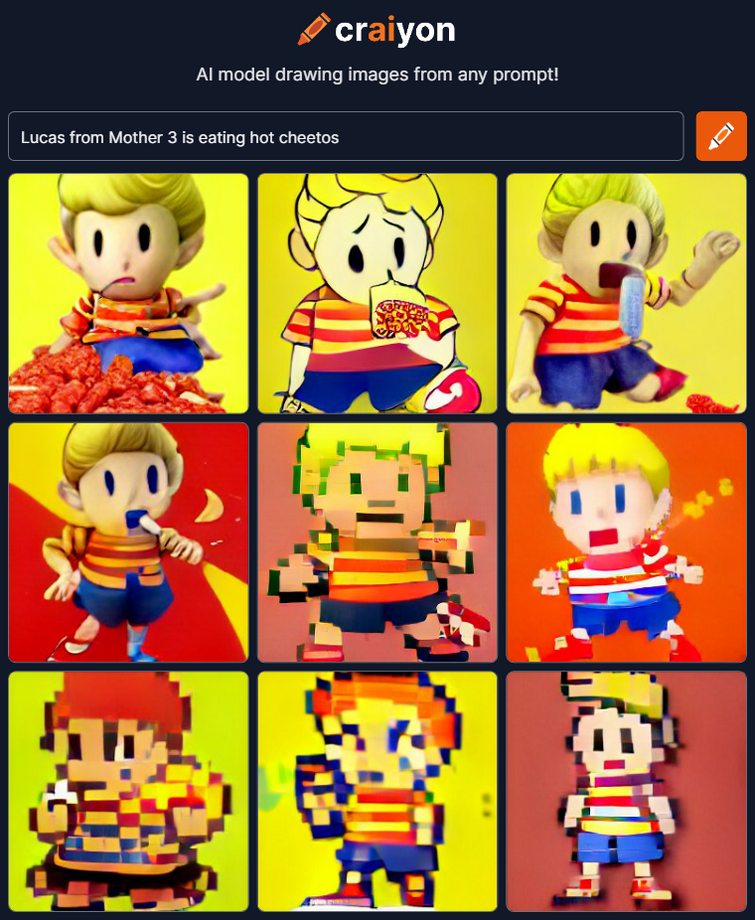 5) Claus has an adventure in the ocean 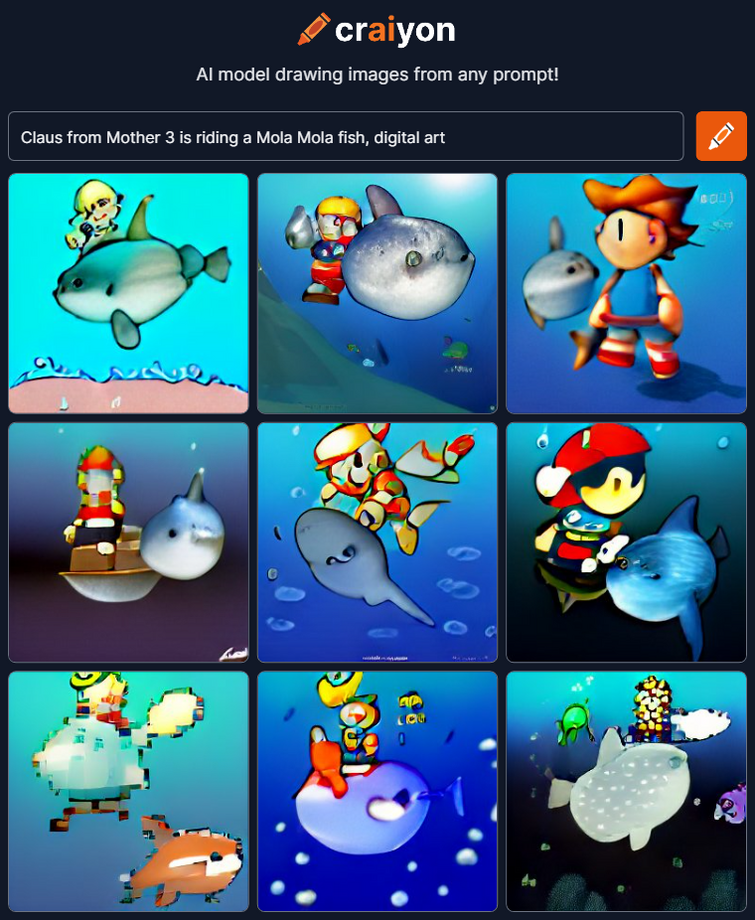 I think these are nice 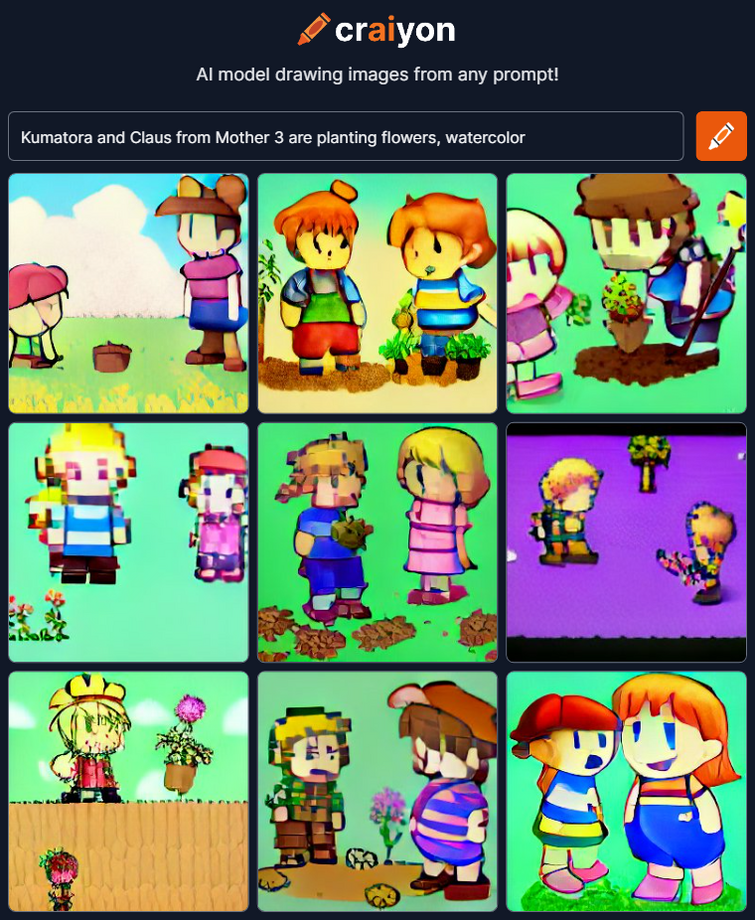 None of these images look like Claus or Kuma, but I think they're pretty cute anyways. 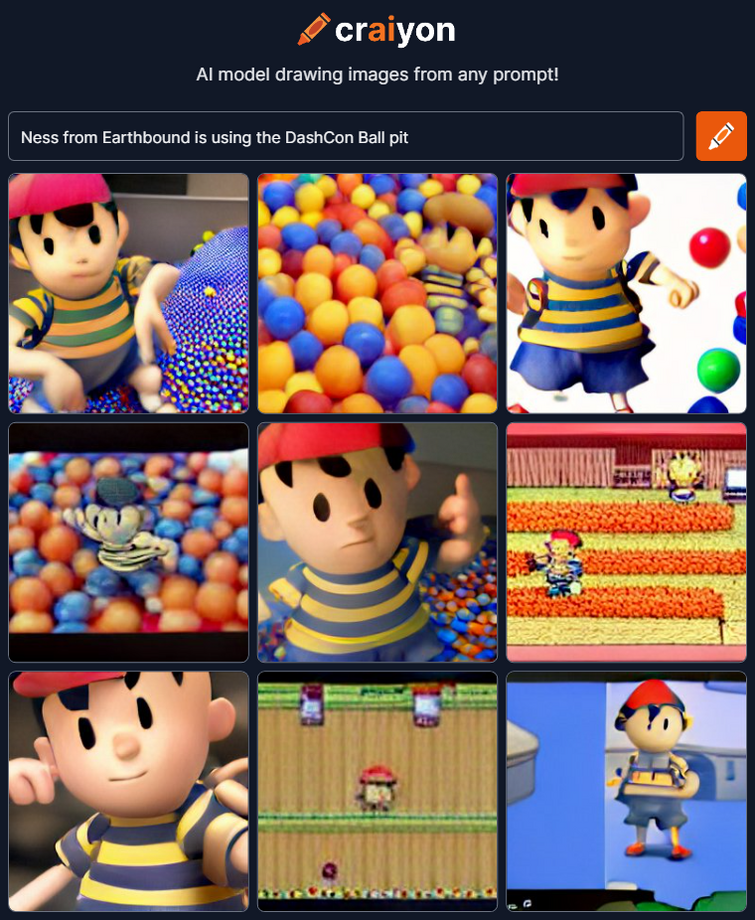 I love basically all of these images. You've got Ness looking like he's become one with the backrooms (Top-Middle), on the thumbnail of a youtube apology video (Middle), and looking like he's on a rap album cover (Top-Left)

Anyhoo, there's been this theory ever since M3 came out, where many people think Jeff is Dr Andonuts in this installment. I actually believe that theory in some capacity, and heres why:

Similar to Pokey, Jeff might've been time traveling through different eras, and it took a toll on his age and body. However, his symptoms aren't as bad as Pokey, where he is legit wheezing after every sentence, and that he's thousands of years old. Now, what I like to think is that Jeff was abducted by Pokey after the events of EarthBound, and was time traveling with him. Just a hunch, but I find it interesting. 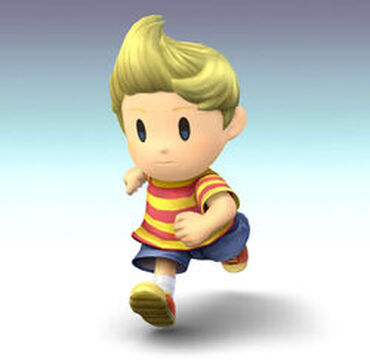 The real Lucas is the friend we met along the way 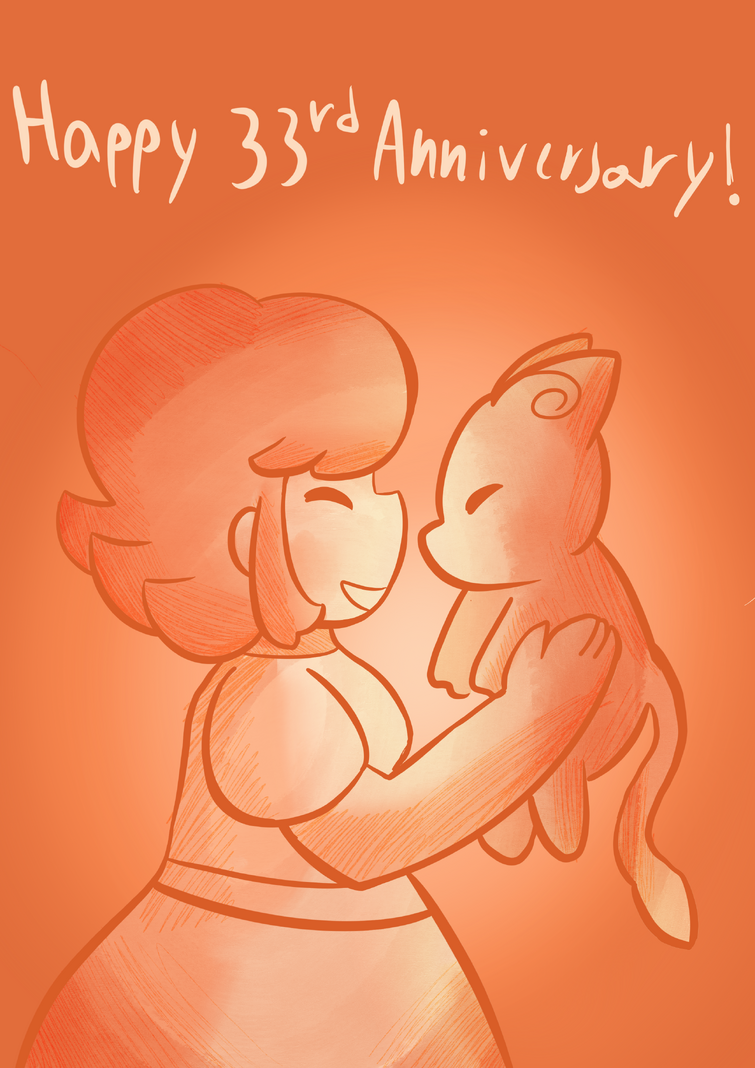 So... I accidentally deleted ALL of my saves on the emulator I was playing EarthBound on... I'm dead Inside

Well here's what I got. Ness as a young adult sorta. Hope the wait was worth it <:D 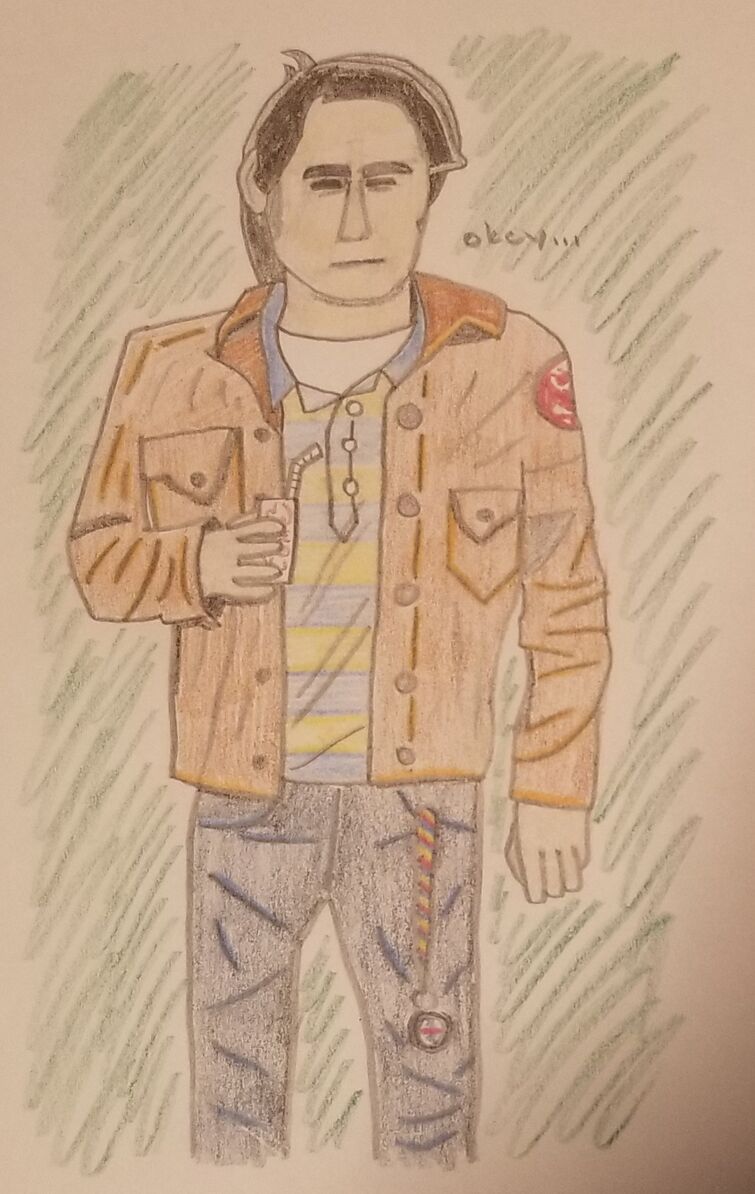 *The Enemy Gets Blown away by Jeff